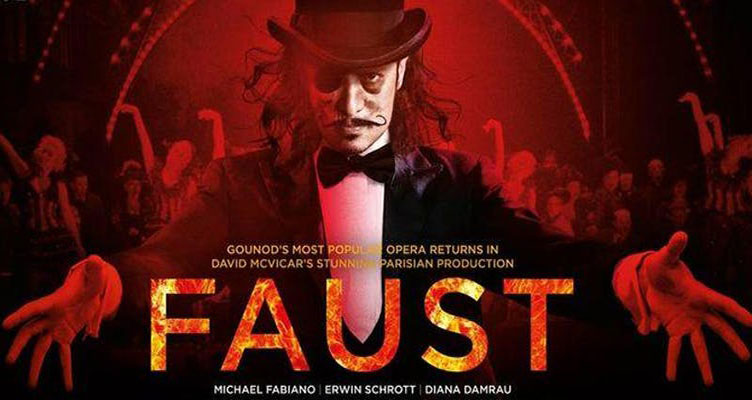 Disillusioned with life, the aged philosopher Faust calls upon Satan to help him. The devil Méphistophélès appears and strikes a bargain with the philosopher: he will give him youth and the love of the beautiful Marguerite, if Faust will hand over his soul. Faust agrees, and Méphistophélès arranges matters so that Marguerite loses interest in her suitor Siébel and becomes infatuated with Faust.

Gounod’s Faust (1859) was one of the world’s most popular operas from the 1860s to World War II, and remains a core repertory work. The story, adapted by Gounod’s librettists Jules Barbier and Michel Carré from Carré’s play Faust et Marguerite, is based on Part I of Goethe’s epic poem Faust, which was a major inspiration for many composers during the 19th century and beyond. Gounod added a ballet to Act V when Faust received its first Paris Opéra staging in 1869.

There are many versions of the story of Faust, who trades his soul with the Devil for youth and power, but Gounod’s opera remains one of the most constantly enthralling. Michael
Fabiano stars as Faust, with Diana Damrau as his beloved Marguerite and Erwin Schrott as the diabolical Méphistophélès. Virtuoso leading roles, a large chorus, sensational sets, ballet and an ecstatic finale make this the epitome of theatrical spectacle – the lavish scale of French
grand opera is wonderfully in evidence in this production by David McVicar, set in 1870s Paris. Above all, the music includes several of popular opera’s most recognizable numbers, performed by a cast of great international singers and the Royal Opera Chorus.

Running time: The performance lasts about 3 hours 30 minutes, including one interval.

Prices include taxes. Membership free event is not applicable.