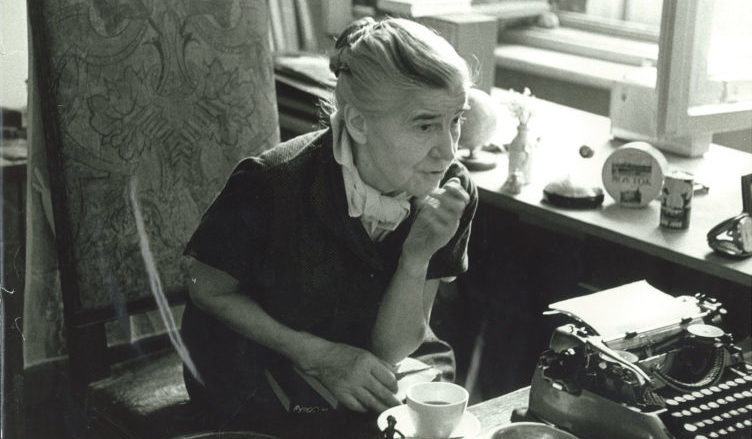 Berlau, born in Denmark, was a bold, creative force who fell in love with the famous German playwright Bertolt Brecht –and suffered for it.

You most likely know of Brecht, whose plays include Mother Courage and Her Children, The Three Penny Opera and The Caucasian Chalk Circle. But it’s unlikely you’ve heard of Berlau and his other lovers who played essential and uncredited roles in the creation of the plays that solidified his reputation. As one scholar put it, Brecht, was the only man he knew who slept his way to the top.

Join us for an intriguing documentary titled Red Ruth: A Deadly Longing, followed by a discussion with two guest speakers, professor emerita, poet and novelist Janice Kulyk Keefer and U of T lecturer Philippa Sheppard.

The 1994 documentary, part of a series titled Women of Power by Flare Productions, features actor Liv Ullmann speaking Berlau’s words, and includes interviews with people who knew her. It explores the traumas of her early life, as well as the highlights, such as her solo bicycle trip to France when she was still a teenager. She sent back dispatches to a Danish newspaper, and when she returned home, she had become a celebrity. She went on to study acting at the Royal Danish Theatre, and by age 22, a Marxist, she was running a workers’ theatre company.

On Sunday, Feb. 9, it will almost be Valentine’s Day — an appropriate time to explore the life and passions of Ruth Berlau, and her creative partnership with and life-long love for poet and playwright Bertolt Brecht, who was married.

Our guest experts Janice and Philippa will discuss Berlau and Brecht, how important Brecht was as a playwright and what Berlau and others contributed to his fame and fortune, often at great expense to themselves.

(This event, focusing on a literary partnership, will serve as a launch for a three-part lecture series featuring other couples who write. Janice Keefer will be presenting the talks at Back Lane Studios on Sunday afternoons starting March 1. She’s calling the series For Better or Worse — Mostly Worse. Read more about it on our website.)

The Extraordinary Women Series: Presented since 2016 by Back Lane Studios at the Revue, the series highlights the stories of interesting women who accomplished much in their fields but were overlooked or relegated to obscurity, sometimes for hundreds of years. The series helps raise funds to support Back Lane’s arts programming.