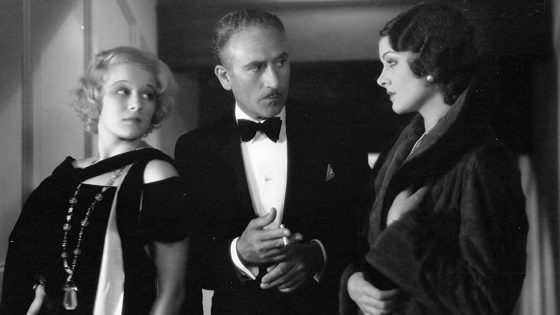 A contained cast of characters traveling aboard a transatlantic ocean liner are pushed to dangerous limits though monetary issues that threaten the lives of the people onboard.

ABOUT THE DESIGNING THE MOVIES SERIES

Hosted by culture writer and critic Nathalie Atkinson, this ongoing series considers the crucial contributions of below-the-line craft in both popular favorites and forgotten gems (more…)

Direct from MoMA, the new digital restoration of William K. Howard’s lavish ocean liner melodrama. The early experiment in multiple overlapping storylines features deep-focus photography by James Wong Howe. No complete American release version of the film has survived: this restoration matched the complete English audio track to picture elements from the French, Italian and Spanish export versions for a full sense of the film for the first time since its original theatrical run. With luxurious interiors and Academy Award-winning art direction by Gordon Wiles.

Presented in 4K, with an introduction to the world of Hollywood Art Deco by series host Nathalie Atkinson.

Digitally restored by The Museum of Modern Art with funding provided by The Film Foundation, The George Lucas Family Foundation, and The Celeste Bartos Preservation Fund.

For INDIVIDUAL MEMBERSHIPS ($350) and FAMILY MEMBERSHIPS, please email us at info@revuecinema.ca to get your ticket!

Prices include taxes. All membership benefits are available.