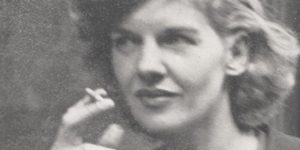 Filmmaker Maya Gallus explores Smart’s life and work in a lyrical documentary: Elizabeth Smart: On the Side of the Angels. Named for a collection of Smart’s diaries, the film features a dramatic portrayal by Jackie Burroughs and is narrated by novelist Michael Ondaatje. Powerful excerpts from Smart’s work, and rare, archival photographs create a compelling exploration of her life and art.

Born in 1913 to a well-to-do Ottawa family, Smart took off for England at age 19 to study piano, but soon began to pursue her interest in writing. It was through words that she fell passionately in love with British poet George Barker long before she met him. They never married, but Smart would have four children by him (he had a total of 15) and, throwing aside the conventions of the day, raised them as a working single mother.

All tickets in advance on Eventbrite: $13. At the door: $15 general admission; $13 for seniors and Revue members.