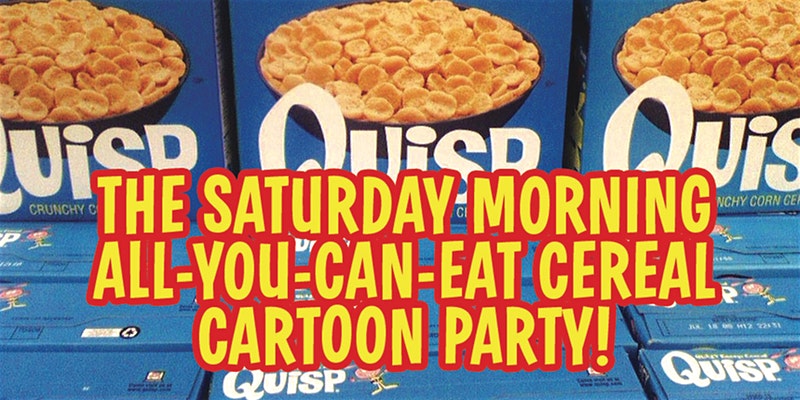 Remember Saturday mornings? Kids today may not realize the significance of the Saturday morning ritual, but once upon a time, we had to wait a whole week to get our cartoon fix, and when we got it, we tended to binge

In that gleefully gluttonous spirit, curator Kier-La Janisse presents a 3-hour trip down memory lane with a tribute to the eye-popping, brain-addling Saturday morning cartoons of yore, complete with a smorgasbord of delicious sugary cereals (and yes, we have non-dairy too!)! You’ll see both faves and obscurities spanning the 40s through the 80s, all punctuated with vintage commercials and PSAs! The lineup is always a secret, but there will be monsters, sci-fi, sleuths, superheroes and all kinds of 2D silliness, so get ready for a sugar rush and an explosion of nostalgia all wrapped up in one candy-coated package.

Curator Bio: Kier-La Janisse is a film writer and programmer, founder of Spectacular Optical Publications and The Miskatonic Institute of Horror Studies. She is the author of A Violent Professional: The Films of Luciano Rossi (2007) and House of Psychotic Women: An Autobiographical Topography of Female Neurosis in Horror and Exploitation Films (2012) and co-edited and published the anthology books KID POWER! (2014), Satanic Panic: Pop-Cultural Paranoia in the 1980s (2015), Lost Girls: The Phantasmagorical Cinema of Jean Rollin (2017) and Yuletide Terror: Christmas Horror on Film and Television (2017).

She edited the book Warped & Faded: Weird Wednesday and the Birth of the American Genre Film Archive (forthcoming), and is currently co-authoring the book ‘Unhealthy and Aberrant’: Depictions of Horror Fandom in Film and Television and co-curating an anthology book on the films of Robert Downey, Sr., as well as writing a monograph about Monte Hellman’s Cockfighter. She was a producer on Mike Malloy’s Eurocrime: the Italian Cop and Gangster Films That Ruled the ’70s and Sean Hogan’s We Always Find Ourselves in the Sea and her first film as director/producer, Woodlands Dark and Days Bewitched: A History of Folk Horror is due out from Severin Films in 2020..

Prices include taxes. Membership free event is not applicable.